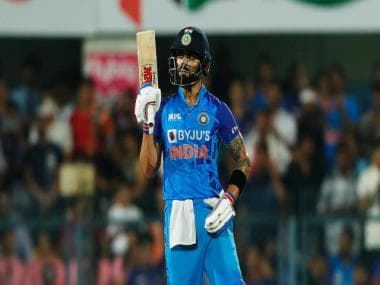 Virat Kohli added another entry to his long list of achievements in a glittering career by becoming the first Indian to go past the 11000-run mark in the Twenty20 format.

The Indian batting superstar went past the milestone during his unbeaten knock of 49 off 28 balls during the second T20I against South Africa at the Barsapara Cricket Stadium in Guwahati on Sunday.

He would however, miss out on his 34th T20I half-century by just one run despite remaining unbeaten in the end as he was happy to give middle-order pinch-hitter Dinesh Karthik the lion’s share of the strike in the final over.

Karthik smashed an unbeaten 17 off 7 balls as the Men in Blue posted a commanding 237/3 after being invited to bat by the Proteas in the second T20I.

Kohli was the only Indian batter to bring up a milestone on the day.

Earlier skipper Rohit Sharma became the first Indian to complete 400 T20 appearances. He would get India off to a commanding start with a 37-ball 43.

Suryakumar Yadav, who lit up the Barsapara Cricket Stadium with a fiery 61 off just 22 balls, would then break Glenn Maxwell’s record for the fastest batter to complete 1,000 runs in terms of balls faced (573).

South Africa face a must-win scenario in this fixture after getting outplayed in the opening game of three-match series in Thiruvananthapuram by eight wickets. The final match of the T20I series takes place in Indore on Tuesday, which then will be followed by three ODIs.