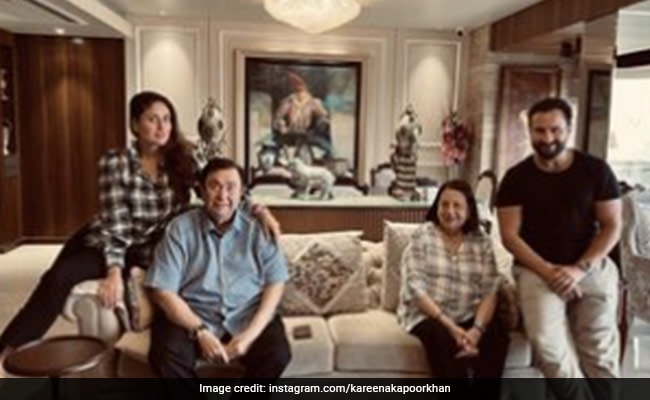 Kareena Kapoor, who loves to share pictures from her fam-jam sessions on social media, added another one to her collection on Friday evening. On her Instagram story, the actress shared a picture from her get-together with dad Randhir Kapoor, mom Babita and her husband Saif Ali Khan. Kareena accompanied the picture-perfect shot with a caption that read: “The loves of my life,” along with a heart emoji. Kareena Kapoor recently starred in Aamir Khan’s Laal Singh Chaddha, while Saif will next be seen in Vikram Vedha and Aadipurush.

This is what Kareena Kapoor posted: Kareena Kapoor’s Instagram profile is dominated by posts from her fam-jam sessions and we love it. On Saif Ali Khan’s 52nd birthday, Kareena posted a picture of Saif Ali Khan with his sons Ibrahim Ali Khan (Saif’s son with ex-wife Amrita Singh), Taimur and Jeh (his sons with Kareena Kapoor). She captioned the post: “Can you find a better looking gang of boys? Hmmmmmmmmm Saifu, Ibrahim, Tim and Jeh baba.”

Kareena Kapoor posted this picture for mom Babita and she captioned it: “The reason we are…”

The one with the Pataudis – Kareena Kapoor shared this picture with sister-in-law Soha Ali Khan, husband Saif, brother-in-law Kunal Kemmu, neice Inaaya and she wrote: “Eid Mubarak from the family that is always trying to take the perfect picture …but never has.”

The perils of trying to take a perfect family picture, hilariously summed up by Kareena Kapoor in this post.

Kareena Kapoor and Saif Ali Khan got married in 2012 and they are parents to two sons – Taimur, 5 and Jeh, who they welcomed in February last year. They have co-starred in films like Tashan, Omkara, Kurbaan and Agent Vinod.