After scripting history with his 100th Test wicket at the venue yesterday, Stuart Broad has pulled off a stunning start today with a magnificent one-handed blinder. 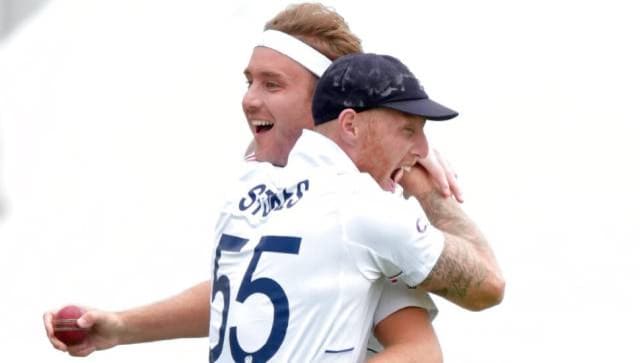 England’s Stuart Broad is hugged by England’s Ben Stokes to celebrate after catching out South Africa’s Kagiso Rabada during the third day of the first Test at Lord’s cricket ground in London on Friday. AP

The third day of their opening Test against South Africa has started on a positive note for England. The visitors concluded the second day at 289/7 on the board, leading the first innings by 124 runs. Coming in to bowl the first over of the day, Matthew Potts sent off Kagiso Rabada just in the third delivery and it was again Stuart Broad behind the success. The Lord’s Cricket Ground has become a dance floor for the English pacer. After scripting history with his 100th Test wicket at the venue yesterday, Broad has pulled off a stunning start today with a magnificent one-handed blinder.

Rabada failed to open his account in the initial two deliveries by Potts who was quite consistent in maintaining the line. The third delivery was short and also a wider which made Rabada go for it. He found a good connection at the middle of the bat and wanted to clear the boundary over the mid-wicket region. The tall man, Broad, was waiting there. When the ball was flying over his head, the 36-year-old gave it a try.

Initially, it was looking like a failed attempt until Broad burst into celebration. He tracked the trajectory of the ball well and threw his right arm while leaping into the air. The crowd, the England dugout and the commentators could not believe their eyes when they watched Broad landing onto the field with the ball stuck in his palm. This might be one of the best catches ever witnessed at the Home of Cricket.

To celebrate the stunner, the England Cricket Board (ECB) shared a clip of it on their official Twitter handle right after the occurrence. The caption reads, “Oh Broady!” The video has stunned the cricket enthusiasts who had missed it live. Since being shared, the Twitter post has earned almost 1 lakh views and over 2,000 users have liked it so far. People went spellbound after watching the splendid effort of the English legend. While one of the fans commented, “What an enviable catch he’s pulled off. The man is heading towards his forties but his reflexes just showed he’s still a teenager,” another one just marked it as a “Screamer!”