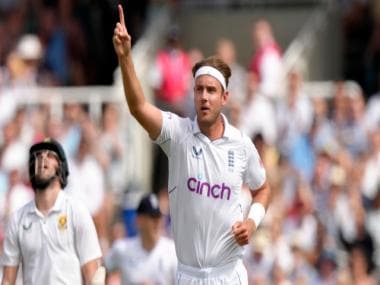 In the opening game of the three-match Test series against South Africa on Thursday at London’s Lord’s Cricket Ground, star English pacer Stuart Broad was only able to claim one wicket. But that was enough to put his name in the chronicles of cricket history.

The 36-year-old from Nottingham became just the fourth bowler in Test cricket history to record 100 wickets at a single venue after taking the coveted wicket of South African wicketkeeper-batter Kyle Verreynne in the 63rd over. James Anderson, a teammate who was on the field to greet him in jubilation, has already accomplished the feat and is standing at a count of 117 scalps so far.

Besides these two legendary bowlers from England, only two other players have taken more than 100 wickets at a single venue. They are Muttiah Muralitharan and Rangana Herath, both from Sri Lanka. Muralitharan, who holds the record for most wickets in Test cricket with 800 scalps to his name, has done so at three different venues: Galle (111), Kandy (117), and the Sinhalese Sports Club Ground (156) in Colombo. Herath, meanwhile, has claimed 100 wickets at the Galle International Stadium, in Galle.

Broad, who played his debut game of red-ball cricket against Sri Lanka in Colombo on 9 December 2007, is now the sixth-highest wicket-taker in the history of the game’s longest format. He has got 553 wickets to his name, and if he picks up 10 more in the current series against the Proteas, he will eclipse his Ashes rival, former Australian quick Glenn McGrath to enlist himself in the top five of the leading Test wicket-takers tally.

South Africa tightened their hold on the opening Test by eliminating England for 165 runs before advancing to 289-7 on Thursday at Lord’s.

The following day there were bundled out for 326, finishing with a lead worth 161. England, in their second essay, lost two quick wickets and were 38/2 at lunch, facing a Herculean task in terms of saving the match.